QAVS Presentation by Her Majesty’s Lord-Lieutenant of Worcestershire

On Friday 19th July 2019 volunteers from Roundabout were presented with the Queen’s Award for Voluntary Service (QAVS) at a ceremony held at the Roundabout premises attended by past and present volunteers, supporters and civic dignitaries.

The award – the MBE for volunteer groups – was presented by Lieutenant Colonel Patrick Hopcroft LVO OBE CStJ Her Majesty’s Lord-Lieutenant of Worcestershire in recognition of the dedication and commitment of the Roundabout volunteers who for the past 25 years have assisted with the relief of poverty by providing donated furniture to people suffering financial hardship.

He said: The volunteers are the life force of Roundabout helping to divert reusable furniture from landfill and helping to alleviate poverty locally by supplying reusable furniture items to individuals and families in financial need. I have observed that Roundabout also provides volunteering opportunities not only for retirees but in particular for people with disabilities. The care and support they provide to their volunteers is exemplary, in some respects they are a charity within a charity which is unique.

The award, a signed certificate by Her Majesty the Queen along with an English Crystal engraved with the official QAVS insignia, was marked with a celebratory party.

Peter Andrews Roundabout Manager, said: I am delighted our volunteers have been honoured with the QAVS. They make such a valuable contribution to the local community helping to alleviate poverty locally. Without their dedication and commitment Roundabout would not exist.

John Barton Roundabout Chairman, added: We are thrilled to receive the award and for our volunteers to be recognised. I would also like to commend the small management team who provide the continuity necessary for the charity and the volunteer trustees who provide the governance.

Cllr Frances Smith, Chairman of Wychavon District Council, said: Congratulations to everyone connected to Roundabout on receiving The Queen’s Award for Voluntary Service and 25 years of making a difference in our community. This is one of the best voluntary organisations in the Vale. Not only does it help vulnerable people but it’s also diverting hundreds of tonnes of reusable furniture from landfill and helping to lower the district’s carbon footprint.

The Queen’s Award for Voluntary Service is the highest award given to local volunteer groups across the UK to recognise outstanding work in their communities. The awards were created in 2002 to celebrate the Queen’s Golden Jubilee, and winners are announced each year on 2 June – the anniversary of the Queen’s Coronation. 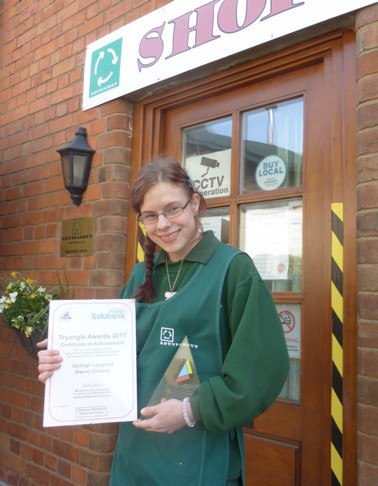 Ceileigh Langford with her Tryangle Award

A caring Vale volunteer who has defied the odds since she was born weighing just over half a bag of sugar has been honored with a major award.

The 20-year-old was born prematurely and weighed just 580 grams at birth.

As a result of her premature birth she has cerebral palsy; she is also profoundly deaf with severe sight impairment and also has mobility issues.

Ceileigh has not let her disabilities hold her back and is a much-loved volunteer at Evesham charity Roundabout’s Blackminster Business Park base.

Volunteers at the popular furniture reuse charity are celebrating after Ceileigh was honored at a special gala awards ceremony at Worcester Bosch in Worcester.

The awards honor those who despite health, disability or social problems manage to overcome adversity and ‘get the job done’, at home, at school or college, or within the community.

Roundabout manager Peter Andrews who nominated Ceileigh said: “Ceileigh thoroughly deserves her recognition for the commitment she has shown to Roundabout for the past four years. “Ceileigh’s mission in life is to try and keep everything spotlessly clean and champion the philosophy of furniture reuse.

“The awards evening was an emotional and proud occasion for Ceileigh’s family and she exemplifies everything that Roundabout strives to achieve,” he added.

The caring approach to recruitment means the charity can now boast more than 50 regular volunteers.

“A significant number of the volunteers have a degree of disability both physical and mental and Roundabout provides a safe and stimulating environment to allow individuals to realize their potential,” Peter added. 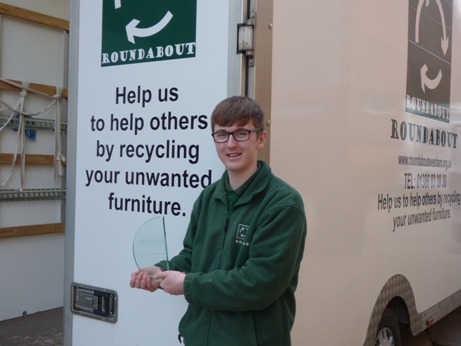 Staff and volunteers at Roundabout on Blackminster Business Park are celebrating after their youngest volunteer Mitchell Anderson was given the Wychavon Young Volunteer prize at the Wychavon Community Recognition awards.

Mitchell and other nominees in the various categories attended Peopleton Village Hall in March 2016 where they were presented with their awards by the leader of Wychavon District Council, Coun Val Wood.

The 16-year-old who lives in South Littleton joined Roundabout in February 2015 and has assisted in all areas of the organisation in particular on the delivery vehicles collecting donated furniture items and delivering furniture to those in need.

In November 2015, Mitchell became Roundabout’s first trainee, a collaboration with South Worcestershire College where Mitchell studies in conjunction with the college and the work experience element of the traineeship with Roundabout.

“I am extremely honoured to receive my award,” he said.

“I am grateful to Roundabout for giving me the opportunity to work with them over the past year. I would not be where I am today without their guidance.

Roundabout Manager Peter Andrews nominated Mitchell and said: “Mitchell thoroughly deserves his recognition for the commitment he has shown to Roundabout.

“Mitchell is an excellent example of what the youth of today can achieve.

“The awards evening was an emotional occasion for Mitchell’s parents who are very proud of Mitchell’s achievements.

“Roundabout has over 50 regular volunteers and without them Roundabout would not exist,” he added.

Roundabout were also runners-up in the Wychavon community project category 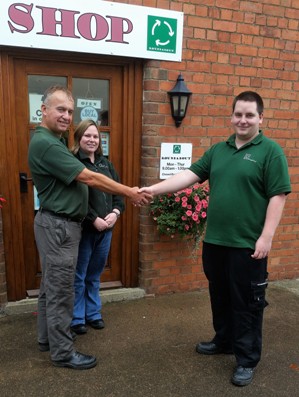 There are celebrations all round at an Evesham charity after it has been confirmed as a finalist for a county wide awards scheme.

Roundabout, which re-uses household furniture to pass on to those in need, has made it through to the final of the Worcestershire Apprentice Awards, after being nominated by South Worcestershire College.

It will battle it out in the Newcomer Apprenticeship Employer of the Year category.

The college made its nomination after one of its students, Paul Byatt, was employed by Roundabout in September last year and has since gone on to achieve full marks in his studies.

The 23 year-old, of Evesham, has achieved 100 per cent in his course work, so secure an NVQ Level 2 in business administration and such was his impact at Roundabout that he has been offered a full-time contract there.

Peter Andrews, manager of Roundabout said: “We at Roundabout are immensely proud of being selected as a finalist in these prestigious awards.

“Employing Paul as Roundabout’s first ever apprentice was a steep learning curve for us.

“Paul has benefited us as an organization by providing additional resilience in key areas of our operation and in return we have provided Paul with all of the necessary support and encouragement for him to succeed.”

The awards ceremony will go ahead on Thursday, November 12th 2015 at The Tree Tops Pavilion, West Midland Safari Park.

Update: Roundabout were runners up to Victoria Carpets of Kidderminster. 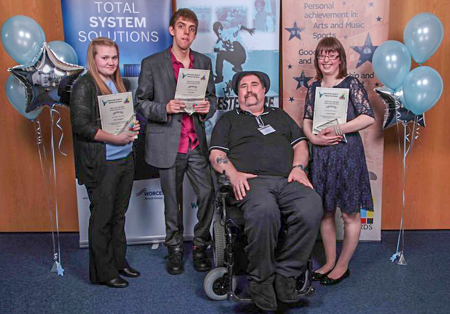 Roundabout are celebrating after volunteer Sam Elliot was presented with a personal development award at the Worcestershire Council for Voluntary Youth Services 2015 Annual Tryangle Awards ceremony held on 26th March 2015.

Sam was one of 18 Tryangle Award recipients from across Worcestershire nominated in 6 categories who were presented with their awards at the Bosch Centre in Worcester. The ceremony was hosted by BBC Midlands Today personality Cath Mackie.

Sam, 22yrs, who originates from Droitwich has been profoundly disabled since birth. Sam has been volunteering at Roundabout for the past 2 years. Through this he has gained both in confidence and qualifications.

He was nominated by Roundabout Manager, Peter Andrews, for his perseverance in overcoming his disabilities and his commitment to helping others by volunteering at Roundabout. He said that “Sam deserves his recognition for overcoming his disabilities and for giving up his time to help others in need. The award ceremony was an emotional occasion for Sam’s parents, Sam exemplifies everything that Roundabout strives to achieve.”

Sam said “I feel really good about receiving this award. Coming to Roundabout has given me focus and opportunities I would not have.”

Phil Street, manager of WCVYS, said that “The Tryangle Awards are about recognising the achievements of the unsung heroes. The young people that show determination to serve their friends, family and community. The young people who received the Awards are perfect examples of the quality of youth volunteering across Worcestershire, they embody what the Tryangle Awards are all about. They are making a genuine contribution and richly deserve an opportunity to be in the limelight.”